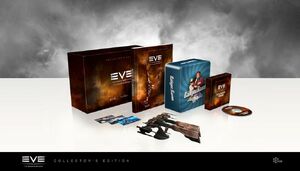 In celebration of being in the hands of gamers for a decade, the creators of EVE Online are releasing a Collector's Edition jam-packed with a ton of extra content.

EVE: The Second Decade Collector's Edition is a must-own for the EVE enthusiast, compiling a decade of the rich history of the EVE Universe into a treasure chest of collectibles to proudly display at home, at work and on the battlefield. From the illustrated hardcover book to the in-game collectibles, the greatest moments in EVE's 10-year history are yours to relive as the second decade begins and future memories to be had lay on the horizon. Commemorative in-game items for both EVE and DUST 514, a 7" Rifter USB Hub, and CCP's board game that funded early development are just the start of what's packed into the massive EVE: The Second Decade Collector's Edition

Add a photo to this gallery

Blind your enemies with the reflection of their defeat in your shining Amarr dropsuit while unleashing a torrent of pain from your new arsenal of weapons. These EVE: The Second Decade Collector's Edition Items are permanent gear, requiring no restocking or replacement.

Retrieved from "https://eve.fandom.com/wiki/The_Second_Decade_Collector%27s_Edition?oldid=17195"
Community content is available under CC-BY-SA unless otherwise noted.