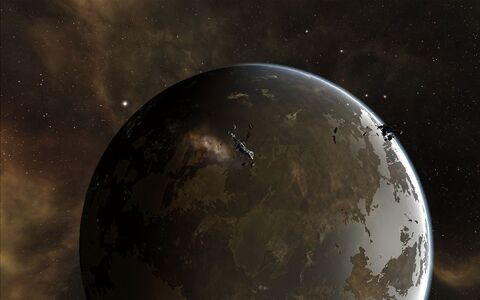 Mekhios (aka. Sarum Prime), named after the founder of the Sarum Family, Mekhios Sarum, is the third planet in the Sarum Prime System. Jamyl Sarum was born there and it serves as the capital system for her family.

It was the first planet colonized in the system. It has an unusual atmospheric composition which leaves it appearing almost metallic from space, with silvery oceans and golden continents. This drew the Sarum Family to name it their capital planet and colonize it.

On the mean, the planet is slightly warmer than the second planet by a few degrees. However, the temperature variation is much wider across the planet, the extreme highs are smaller, and it is much less humid, making it far more comfortable for human habitation. The planet has a relatively short orbital period, giving it two seasons; a hot, dry summer and a warm, damp spring.

The planet, as the capital of the Sarum Family, is one of the most populated in the Empire. Today, the planet serves primarily as a tourist and trade hub, a place where the rich and affluent of the cluster can buy high-priced Amarr goods, see elaborate Amarr operas, and view famed works of art. Several prominent artists call Mekhios their home.

The planet's biosphere was very advanced and was home to several sub-sapient species that scientists believe may have one day evolved intelligence if allowed a few more million years of development. Because the planet has not been developed as an industrial or agricultural world as much as Sarum Prime II, the ecology has remained healthy and mostly stable, though some unavoidable extinctions occurred.

On June 10th, YC 110, the Battle of Mekhios occurred in orbit around the planet while Minmatar troops assaulted the surface freeing slaves. Due to the counter attack orchestrated by Jamyl Sarum, the initial damage was contained, though still great. However, the battle left large amounts of debris in orbit around the planet. Much of it remains in a seemingly-stable orbit today, though some entered the atmosphere and caused widespread destruction.

Retrieved from "https://eve.fandom.com/wiki/Mekhios?oldid=17406"
Community content is available under CC-BY-SA unless otherwise noted.